Communication satellites are one of the backbones of today’s information society. Satellites allow for a plethora of unique services, ranging from navigation information via GPS or GALILEO, broadcasting services for television to fixed or mobile Internet connectivity. However, the advantages of satellite communications come with the tremendous technical difficulties and financial risks to build, launch, operate and maintain a fleet of satellites in orbit. Proper satellite performance monitoring and testing before and after launch is therefore an absolutely critical task for satellite operators to guarantee 24x7 service availability and business continuity.

The SES Group is operating one of the largest satellite fleets in the world, covering 99% of the world’s population with the footprints of its satellites and serving customers in Europe, America, Africa, Middle East and Asia. SES ASTRA TechCom, an SES ASTRA company, is managing and extending the so-called In-Orbit Test System (IOTS) used for monitoring and testing the SES ASTRA fleet of 15 satellites and those of external partners. The IOTS is a fully automated system used to verify the health of the satellite’s communication payload immediately after launch and regularly later when the satellite is in commercial use on its final orbital position. It has been designed to support distributed test campaigns for satellites with geographically separated beams or a number of separated spotbeams.

Figure 1 shows the 9m antenna used by the latest IOTS - a complete in-house development. Figure 2 depicts the rack with the corresponding measurement equipment. Once a satellite test has been defined and started, the IOTS software takes over the control of the antenna, the measurement instruments, and the coaxial and waveguide switches. IOTS reads the atmospheric attenuation to correct both transmit and receive power and connects to satellite telemetry to retrieve the state of the satellite and to record important telemetry parameters along with the measurement results.

The current IOTS does implement the logic for a particular satellite test procedure in the Java programming language. However, future test campaigns raise the demand for a more flexible mechanism to specify test procedures. First, an ideal solution would allow the user to define what he wants to test and not to tell the system how to do it. This declarative approach would allow defining plans and failover mechanisms for both local as well as remote execution on any station integrated in the satellite performance testing infrastructure. Second, such an approach would encompass a number of additional but “hidden” services. Those hidden services would make sure that the correct test systems are addressed, that test plans are in line with the properties of the test systems, that the resources are properly negotiated and scheduled and that test stations are available for that particular campaign.

This project aims at a prototype implementation of a flexible satellite testing infrastructure supporting a declarative approach to test procedure definition and execution in a heterogeneous distributed environment. The prototype needs to seamlessly connect to the device drivers existing and implemented in CORBA.
The following list outlines the tasks to be achieved:

It is intended to re-use already available and proven tools and components, particularly in the open source community, and extend them with required features where needed. Development from scratch shall be kept to a minimum.

SES ASTRA TechCom will give a two-day workshop to the student team on communication satellites, their testing and the architecture of such test systems. This workshop will also support and if necessary guide the students in setting up their project and defining the coarse requirements.

Upon system availability, the student team will get a chance to connect and demonstrate the prototype solution at one of SES ASTRA’s live satellite test systems.

This project will be executed in close cooperation between the Hasso Plattner Institut and SES ASTRA TechCom S.A., an SES ASTRA company.

SES ASTRA and SES ASTRA TechCom are members of the SES group, whose combined resources offer customers a world of assets and top-class expertise. 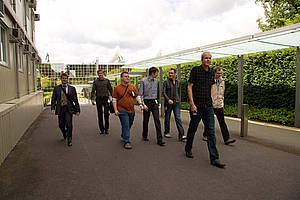