Potsdam. Potsdam's Hasso Plattner Institute (HPI) has achieved a top score in "Karriere" magazine's most recent evaluation of computer science programs at German universities and colleges. Confirming the results of a similar survey conducted by the Centre of Higher Education Development (CHE), the HPI ranked fourth on a list of the best study locations for computer science in Germany. In the June issue of "Karriere" the editors call Germany's only privately-financed university-affiliated institute a "shooting star in the field of computer science".

More than 51,000 students, graduates and decision-makers from over 1,000 companies were polled. The votes of these three groups flowed equally into the ranking and represent a total of 80 percent to the final results. The remaining 20 percent were made up of objective criteria such as the length of study and overall support.

The HPI's "IT Systems Engineering" program is unique in Germany and was voted the number one program by students taking part in the Karriere rankings. The reasons given for these rave reviews included the HPI's outstanding facilities - 71 percent of students were "very satisfied" with these facilities - and excellent evaluations of instructors, who received an average grade of 1,4.

The Hasso Plattner Institute was founded six years ago, and this was the first year that it was featured in both the CHE and Karriere surveys. In the Karriere ranking, the HPI achieved 69 of 100 possible points, the same amount as RWTH Aachen University of Technology. Only Darmstadt Technical University (72 points), Munich Technical University (78 points) and Karlsruhe University (80 points) received more index points. In the CHE ranking, the HPI was assigned to the top group of universities in four of the five key criteria (general study conditions, support, IT infrastructure, research funds). This brought the HPI to 4th place nationally and 1st place in the federal states of Berlin and Brandenburg. In national comparison, only the computer science programs at Karlsruhe University, Paderborn University and Munich's Technical University had overall better scores than the HPI, an institute funded entirely by the private means of its namesake, Hasso Plattner.

Where to study computer science in Germany? The most recent rankings in comparison: 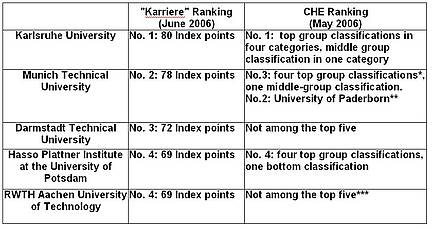