For bachelor students we offer German lectures on database systems in addition to paper- or project-oriented seminars. Within a one-year bachelor project, students finalize their studies in cooperation with external partners. For master students we offer courses on information integration, data profiling, and information retrieval enhanced by specialized seminars, master projects and we advise master theses.

Most of our research is conducted in the context of larger research projects, in collaboration across students, across groups, and across universities. We strive to make available most of our datasets and source code.

Please do not hesitate to reach out directly to us, if you cannot find a paper, slides, or other research artifacts.

DBpedia - A Large-scale, Multilingual Knowledge Base Extracted from Wikipedia

The DBpedia community project extracts structured, multilingual knowledge from Wikipedia and makes it freely available on the Web using Semantic Web and Linked Data technologies. The project extracts knowledge from 111 different language editions of Wikipedia. The largest DBpedia knowledge base which is extracted from the English edition of Wikipedia consists of over 400 million facts that describe 3.7 million things. The DBpedia knowledge bases that are extracted from the other 110 Wikipedia editions together consist of 1.46 billion facts and describe 10 million additional things. The DBpedia project maps Wikipedia infoboxes from 27 different language editions to a single shared ontology consisting of 320 classes and 1,650 properties. The mappings are created via a world-wide crowd-sourcing effort and enable knowledge from the different Wikipedia editions to be combined. The project publishes regular releases of all DBpedia knowledge bases for download and provides SPARQL query access to 14 out of the 111 language editions via a global network of local DBpedia chapters. In addition to the regular releases, the project maintains a live knowledge base which is updated whenever a page in Wikipedia changes. DBpedia sets 27 million RDF links pointing into over 30 external data sources and thus enables data from these sources to be used together with DBpedia data. Several hundred data sets on the Web publish RDF links pointing to DBpedia themselves and thus make DBpedia one of the central interlinking hubs in the Linked Open Data (LOD) cloud. In this system report, we give an overview of the DBpedia community project, including its architecture, technical implementation, maintenance, internationalisation, usage statistics and applications. 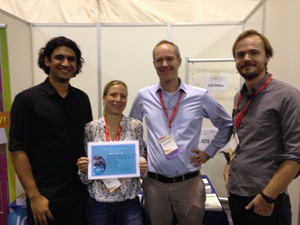