Medical image, such as CT, MRI, shows the information inside the patient body by non-invasive method, so that it is much helpful for doctor´s diagnoses and less painful for patients. However the raw data can only give the material to doctor, the doctor as to decide by himself which is important which is not. The computer-aided diagnoses is to use computer to process the medical to extract the useful information so that the doctor can make a diagnoses decision easier and quicker. In our project the team of Prof. Dr. Christoph Meinel want to do medical image segmentation in three dimension and visualize the segmented object, further more give doctor the means of measurement and analysis of interested object. 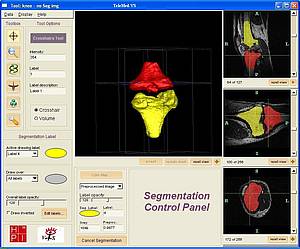 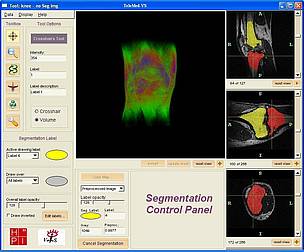 ... to our Research:
Security Engineering - Learning & Knowledge Tech - Design Thinking - former
... to our Teaching:
Tele-Lectures - MOOCs - Labs - Systems
... to our Publications:
Books - Journals - Conference-Papers - Patents
... and to our Annual Reports.